Crime writing and food is a classic combo

It is well-known that detectives have healthy appetites.

Of course, this is particularly true amongst European detectives, from Hercule Poirot and Inspector Maigret to Salvo Montalbano and Pepe Carvalho. But Sherlock Holmes, Nero Wolfe, or Philip Marlow, to name a few, are also connoisseurs of fine food.

There are even some crime fiction novels that come complete with recipes, menus, and food commentaries, such as The Debt to Pleasure by John Lancaster, a magnificent literary OVNI where a murder mystery is disguised into a culinary journey through France. A real feast for crime lover foodies!

In fact, it is such a successful formula that a whole subgenre known as the “culinary cosy” has emerged. Books in this subgenre feature deadly plots, food, cooking, and recipes, with titles such as Chocolate Chip Cookie Murder, Toast Mortem, Butter off Dead, or The Long Quiche Goodbye.

A cooking detective is an obvious recipe for success and it also allows authors and publishers to display their books in both the cookbook and the mystery categories, thus doubling their exposure.

And if you like to bring some crime in your kitchen, there are plenty to choose from among the many cookbooks based on famous fictional detective stories, such as The Sherlock Holmes Victorian Cookbook, Madame Maigret’s Recipes, or The Nero Wolfe Cookbook, to name only a few.

More exotic, and also more recently published, is the mouth-watering Jason Goodwin’s cookbook, Yashim Cooks Istanbul, based on, Yashim, his Ottoman eunuch Detective, where the colour and flavour of Istanbul come to life.

In detective fiction, food (and booze) can bring a story alive. It is a good way to establish the context and the backdrop for the plot. It also helps brush the detective’s distinctive personality.

This is because food is much more than something that fuels and sustains us. There is a symbolic meaning to the food an individual consumes. It reveals his or her personality, place within society and cultural identity.

“Tell me what kind of food you eat, and I will tell you what kind of man you are.”
– Jean Anthelme Brillat-Savarin (1755-1826), epicure and gastronome.

Cafés, bars and restaurants mentioned in a story play a similar role as food. But they often also have a crucial function in a plotline, as a special connection point; a neutral and safe place where characters come into contact and exchange information without attracting attention.

Hieronymus “Harry” Bosch, definitely my favourite good ol’ cop character is no exception. What he eats and drinks, the bars and food places he frequents, all have their importance in defining his personality.

Best places in Los Angeles according to Harry

LAPD detective Hieronymus “Harry” Bosch was first introduced to readers in 1992 with the publication of The Black Echo.

Michael Connelly has written several series with other protagonists. In 1998, Terry McCaleb, a retired FBI profiler, made his entrance in Connelly’s world with Blood Work. The book was brought to the big screen in 2002, starring Clint Eastwood.

There is also Mickey Haller, who arrived on the scene in The Lincoln Lawyer in 2005. Bosch’s half-brother, he is a criminal defense attorney who describes himself as a “member of the dark side” and “defender of the damned”.

Connelly’s first female protagonist, Renee Ballard, made her debut in the 2016’ novel The Late Show. She is a detective working the graveyard shift at Hollywood Division.

Connelly likes to bounce his characters, heroes and villains, from one series to the other. “It helps link all the work so that in my mind it is all part of the same story mozaic”, he explained in an interview. However, he confessed in another interview that “you get to the end of a book and you ask yourself, am I finished with this character or is there more to say?”

Obviously, Harry Bosh is a keeper. At least as long as he realistically can be… Because  Harry has aged in real time, through the series, from age 40 to close to 70 now!

An explanation to his longevity is that Harry Bosh became famous all over the world, and even more, since his stories have been turned into a series of Amazon Prime TV shows with Titus Welliver in the role of the famous detective.

One of the appeals of the Harry Bosch books is that they portray both a character and a place. Harry and Los Angeles. The two are intimately connected. Through Harry’s life, Michael Connelly chronicles the history of the city, revealing its true nature over the years.

There isn’t an overwhelming number of eating and drinking places evoked in the book series. Harry is too busy chasing down leads. But he can still be found indulging in eating or drinking occasionally. Enough places have been mentioned throughout the years, to make me feel like I discovered some of LA’s best spots to grab a meal or a drink.

The streets, the crowd, the music, the food; all have become somehow familiar to me.

It is all about making fiction real, explains Michael Connelly in an interview:

“If it feels real to the reader, then it is real. It lives.”

One thing is sure, with his long career as an LAPD homicide detective and private investigator, Harry certainly knows where to get a real good meal (or drink) in town!

One day, I might go and visit LA, my Kindle loaded with all the Harry Bosh books under my arm.

It is a dream, which hopefully will come true, to visit some of the diners, drinking holes, taco trucks, chilli dog stands and doughnut shops I discovered in Connelly’s books.

Right now, a few come to my mind, but I am sure that with time, what will happen is that the list will get longer and longer.

In the LA Weekly, I learned a bit of the history of the place: “The Horseless Carriage Restaurant was the brainchild of Galpin Motors owner Herbert “Bert” F. Boeckmann II, who wanted his customers to have a place to go while waiting out the arduous process of servicing or purchasing a car.”

Definitely, a place I would choose to go for breakfast.

In Two Kinds of Truth, it’s also where Bosch stopped one morning on his way to San Fernando:

“In the morning Bosch ate breakfast at the counter at the Horseless Carriage, a diner located in the center of the vast Ford dealership in Van Nuys. It would only be a few miles from there to San Fernando and he had grown tired of eating the free breakfast burritos dropped off in the war room each morning. The Horseless had a fifties feel to it and was a lasting reminder of the population and expansion boom that swept the Valley after World War II. The car became king and Van Nuys was an auto-buying mecca with dealerships lined up side-by-side and offering coffee shops and restaurants as draws to their customers.”

It has been there since 1972! So, it must be good. And I love good Chinese food.

From the menu, I would definitely choose the Fried Rice with Shrimp and the Fried Pork Chop with Salt…

“They ate in silence for a few minutes. Bosh always thought Chinese Friends had the softest and sweetest shrimp he had ever tasted in fried rice. The pork chops, as thin as the plastic plates they are off of, were also perfect. And Kiz was right, they were best eaten by hand.” (The Closers)

Probably the most famous of all the places frequented by Bosh at one time or another. And it is so much part of the literary history of the city. Famous writers who had their habits there include Lillian Hellman, Dorothy Parker, Dashiell Hammett, John O’Hara, Thomas Mann, William Faulkner, Bertolt Brecht, F. Scott Fitzgerald, Ernest Hemingway, Budd Schulberg, Nathaniel West, and Gore Vidal. Wooah!

Although in Lost Light Harry stops there for a late lunch, I think it would prefer to go there for dinner, before hitting the bars, but I would follow his advice and order:

“A Ketel One Martini for openers, followed by a chicken pot pie, creamed spinach on the side.” (Lost Light)

An old neighbourhood watering hole since the 1940s, it used to be called the Metropolitan Bar. Renovated and reopened under its new name in 2006, it is now a celebration of “the uniqueness of being Mexican-American in East Los Angeles”, says their website.

In The Crossing, Harry Bosch meets detective Lucia Soto at her haunt, Eastside Luv, which he describes as

“a corner bar with a mural on the outside wall showing an old mariachi with white whiskers and a wide-brim hat”. (The Crossing)

I would drink a Modelo beer or two and watch the crowd go bonkers.

Perhaps Lucia will dance on the bar…

Bosch’s partner, Chu, commented about the incongruity of Western Avenue being in East Hollywood.

It is said to make the best taco in Hollywood. And it is open until 4 am!

“He is only there at night, though, and everything tastes better at night, anyway.” (The Drop)

No doubt a great place to finish the night. What to eat there? The same as Bosch got on his way home to eat with his daughter (The Drop): Carne asada, with tacos, with sides of guacamole, rice and salsa.

Connelly grew up in Fort Lauderdale, Florida. His career as a newspaper reporter, specializing in the crime beat.

He was inspired to become a mystery writer when he discovered Raymond Chandler’s work. He went on to write three more novels about Detective Bosch — The Black Ice (1993), The Concrete Blonde (1994), and The Last Coyote (1995) — before quitting his job as a reporter to write full-time.

In total, he has written more than 30 novels, but also non-fiction work, such as Crime Beat; A Decade of Covering Cops and Killers (2006).

With over seventy-four million copies of his books sold worldwide and translated into forty foreign languages, he is one of the most successful writers working today. His latest endeavour is a new true-crime podcast, Murder Book. 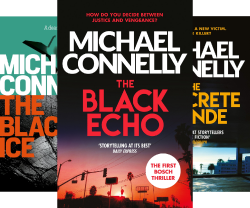 The Day I Almost Met Erich von Daniken In Beatenberg

We use cookies on our website to give you the most relevant experience by remembering your preferences and repeat visits. By clicking “Accept”, you consent to the use of ALL the cookies.
Cookie settingsACCEPT
Manage consent

This website uses cookies to improve your experience while you navigate through the website. Out of these, the cookies that are categorized as necessary are stored on your browser as they are essential for the working of basic functionalities of the website. We also use third-party cookies that help us analyze and understand how you use this website. These cookies will be stored in your browser only with your consent. You also have the option to opt-out of these cookies. But opting out of some of these cookies may affect your browsing experience.
Necessary Always Enabled
Necessary cookies are absolutely essential for the website to function properly. This category only includes cookies that ensures basic functionalities and security features of the website. These cookies do not store any personal information.
Non-necessary
Any cookies that may not be particularly necessary for the website to function and is used specifically to collect user personal data via analytics, ads, other embedded contents are termed as non-necessary cookies. It is mandatory to procure user consent prior to running these cookies on your website.
SAVE & ACCEPT